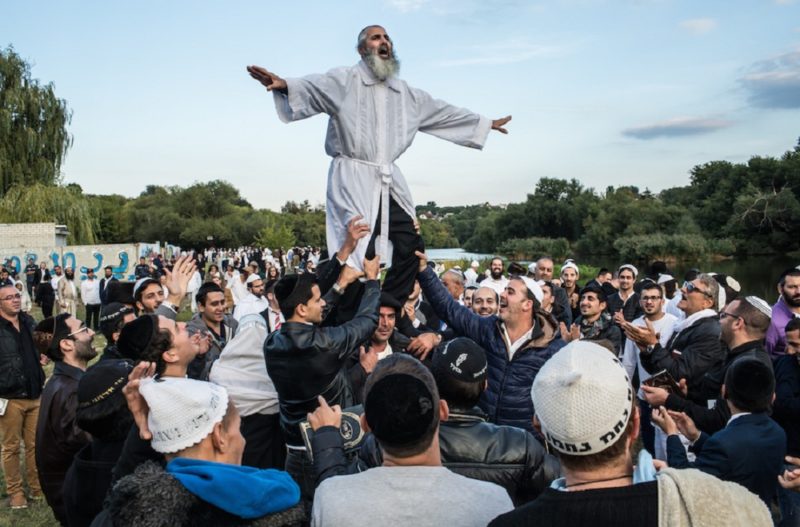 Tens of thousands of Hasidic Jews from around the world flock to the city of Uman in southern Ukraine every year to celebrate Rosh Hashanah – the start of a new year in the Jewish calendar – at the grave of Rebbe Nachman of Breslov, the founder of the Breslov Hasidic movement.

The Hassidim were met this year by representatives of the Svoboda All-Ukrainian Union who hung banners and chanted slogans against the Hasidic pilgrims.vLarge posters depicted an “alien-like” Jewish figure behind the universal “unwanted” symbol. About 300 supporters of the nationalist party Svoboda, or Liberty, demanded that Hasidic Jews not be allowed to gather in the town of Uman, about 125 miles (200 kilometers) south of the capital. The protesters at the rally shouted “Ukraine for Ukrainians.” A court had ordered the activists ahead of time not to stage the demonstration.

The police encircled demonstrators who gathered near the monuments to Ukraine’s folk heroes Honta and Zalizniak on Sunday to stage a court-banned rally “Uman without Hasidim” demanding stricter controls on Hasidic pilgrims coming to Uman. Deputy Head of the union Andriy Ilienko and members of Svoboda factions in Uman City Council, and in Cherkasy Regional Council told the police that they were holding a meeting with voters.

However, after a while, the nationalists formed a column and started chanting: “Uman without Hasidim.” Law enforcement officers surrounded them and put 53 participants into police cars. Law enforcers seized three smoke grenades, five aerosol spray cans, slingshots, metal rods, knives, scissors, and ropes from the detainees, the police reported.

After the charge sheets were drawn up, the detainees were released.

Svoboda All-Ukrainian Union Leader Oleh Tiahnybok said earlier they demanded stricter legal and sanitary controls on Hasidic pilgrims. He also said that law-enforces should see that Hasidic pilgrims should respect the custom of local residents, observe their rights and prevent the breaches of public order by the pilgrims.

The Svoboda All-Ukrainian Union is a nationalist right-wing political party in Ukraine. Svoboda’s ideology is based on the concept of “natiocracy“, which centers around the right of each titular ethnos to have complete control over its own ethnic territory. They use an ethnic definition of the Ukrainian nation that assigns a non-Ukrainian status to all non-whites, Jews, Poles, Russians and other minority Ukrainian ethnicities.

During the 2010 Ukrainian local elections the party won between twenty and thirty percent of the votes in Eastern Galicia, where it became one of the main forces in local government. As of 2011, Svoboda has factions in eight of Ukraine’s 25 regional councils, and in three of those Svoboda is the biggest faction.

Anti-Semitism in Ukraine is part of a general attitude toward national minorities in the country. In the larger cities (Kiev, Kharkov, Dnepropetrovsk and Simferopol) skinhead groups are active and street attacks against national minorities occur. In 2006 there was also an increase in the number of attacks and attempted attacks on Jews. In Dnepropetrovsk an identifiably Jewish man, Khaim Gobrov, 20, was severely stabbed and beaten on his way from the Golden Rose Synagogue on 20 April, Hitler’s birthday. A few days earlier four Jewish youths had been attacked by a group of skinheads in the city’s main square. Three men assaulted a Jewish student, Azaria Menaker, at the Kiev metro on 5 March.

Fans of an Israeli team that played a football match on 14 September 2006 against a local Odessa team were beaten up after the game. On 18 September 2006, 24-year-old Haim Weitzman was beaten by a group of youths shouting “I don’t like Jews” in the center of Odessa.

Many memorials to Holocaust Jewish victims were desecrated in Ukraine. Synagogues throughout Ukraine were stoned and/or desecrated with anti-Semitic graffiti. On 14 February 2006, the canard “We will slaughter you like pigs” was painted on the fence of a synagogue in Lvov. The slogans “Death to the kikes,” “Ukraine for Ukrainians” and “Whites Forward” appeared in several places in the city. Jewish cemeteries were desecrated. Anti-Semitic graffiti also appeared in the streets. In early June 2006, a Star of David on gallows and “Juden Kaput! Don’t Stop Hooligans” were painted at the underground passage in Kiev.

There are about 600-700 anti-Semitic articles published each year. The anti-Semitic monthly Idealist, issued by a virtual movement of the same name, published a “List of 330 Yids at the Ukrainian Parliament.” Beside each name was a Star of David, which the author explained indicated that they were either Jews or married to Jews. He adds: “Where there are no people − there are no problems. So, if the Yids disappear − the Yid problem will disappear too.”

There is much rhetoric condemning anti-Semitism in general. President Viktor Iushchenko promised at a meeting with rabbis from the Federation of Jewish Communities in Ukraine that the authorities were committed to the struggle against anti-Semitism. Nevertheless, all attempts in 2006 (as in previous years) to influence the prosecutor’s office and other authorities to take action were unsuccessful.

The Ukrainian media usually ignore anti-Semitic attacks and most of the incidents were not reported on national TV or radio or in the press. Local authorities and the police tend to classify anti-Semitic incidents as hooliganism and some local authorities even deny the existence of neo-Nazis and skinheads in their regions.

After this description of the hatred that Jews can find today in Uman and the rest of the Ukraine, there are some Rabbis who have come out against this custom of married men traveling to the tomb of Rabbi Nachman of Breslav in Uman, Ukraine for the Rosh Hashanah holiday without their families.

There is no justification in Jewish law for leaving one’s family to take the trip said Rabbi Ratzon Aroussi, the rabbi of Kiryat Ono in Israel and a member of the Rabbinic Council of the Chief Rabbinicate. “However, we must speak the truth: the unity of the family is above everything else. It is a very precious thing in halakhah [Jewish law].”

Visits to a chassidic leader on holidays can be problematic for the same reason. “The spiritual connection to the Admor [Torah leader – ed.] is important – but not at the expense of your home,” he declared. Visits can be at another time of the year when there are no holidays.

“Whoever leaves his family and goes to his rabbi or ‘admor’ (Chassidic leader) for the holidays, whether in the Holy Land or even more so, outside the land, is violating halakhah,” he stated. Those who wish to connect to their spiritual leaders on the holiday “should take care to bring their families with them, but G-d forbid that they should leave their families,” he added.