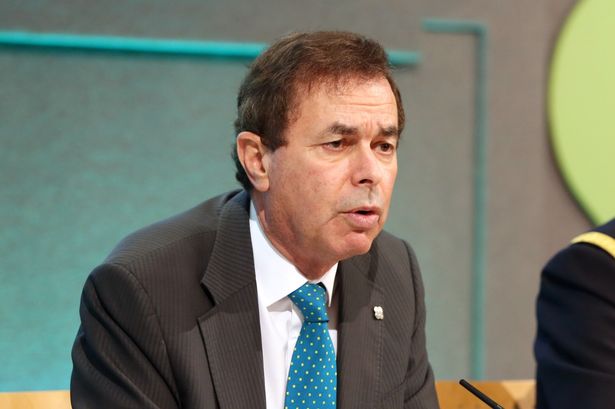 Alan Joseph Shatter, Irish Justice Minister and Defense Minister, fights the battle against the delegitimization of Israel. Violent anti-Semitism is rare in Ireland, but the Irish government has a strong anti-Israel bias. Nicky Larkin, Irish video artist, said that “being anti-Israel is supposed to be part of our Irish identity, the same way we are supposed to resent the English.”

Alan Shatter accused the Ireland Palestine Solidarity Campaign (IPSG) on May 9, 2012 of waging a “cyber-bullying” campaign in directing its members to ‘target’ the website of Irish folk group Dervish in order to intimidate the group into cancelling their planned concerts in Israel. He accused the group of ignoring the constitutional rights of Irish citizens and those who live in this State to get on with their lives, to travel and to perform around the world free from bullying, intimidation and discrimination.

Mr. Shatter said: “It is absolutely understandable that the group, in the face of an ‘avalanche of negativity’ and ‘venom’ on social media websites took the decision to cancel their concerts — but it is a great pity that the bullying tactics of the IPSG worked.” Shatter urged Irish artists not to give in to “cultural fascism” by signing up to a boycott of Israel. “If the IPSG were in any way interested in promoting peace and reconciliation in a troubled part of the world, they would recognize the value of cultural and artistic exchanges.”

He said it was “extraordinary” that the IPSG campaign “occurred at a time when thousands have lost their lives in Syria. IPSG has remained silent about crimes against humanity being committed there.” Mr. Shatter also claimed papers recovered from Osama bin Laden’s compound in Pakistan had suggested Ireland was a “promising ground” for the al-Qaeda leader’s followers to find support.

Mr. Shatter said he was called a “Zionist pig” by a protester outside the Fine Gael Ardfheis who he knew from anti-Israeli protests. “They are willing to talk to the Minister of Justice like that. I have broad shoulders, but to target a group of musicians like Dervish is totally unacceptable,” he added.

Alan Joseph Shatter was appointed Minister for Justice and Equality and also Minister for Defence on 9 March 2011. He is of Jewish background, and was born and always lived in Dublin. Shatter is an Irish Fine Gael politician and a member of the Irish parliament for the Dublin South constituency. He was first elected at the 1981 general election, lost his seat at the 2002 general election, and re-elected at the 2007 general election. Having a legal background, Shatter has proposed much legislation during his time as a Member of Parliament.

In 1997 the readers of Irish Music Magazine awarded Dervish Best Overall Trad/Folk Band of the Year. On November 14, 2006, the Irish national broadcaster RTÉ announced that Dervish were to perform the Irish entry for the Eurovision Song Contest 2007.

The band pulled out of a three-date concert tour scheduled in Israel starting on June 26, 2012. In a statement published on its website and its Facebook page, Dervish called its original decision to participate in the concerts “completely non-political” and that once the band became aware that “there was a cultural boycott in place,” it was not willing to break the boycott. The band also stated “Our decision to withdraw from the concerts reflects our wish to neither endorse nor criticize anyone’s political views in this situation.”

The band’s lead vocalist, Cathy Jordan, stated “I deeply regret any upset caused by all of this…It was far from our intention to stir up all this anger and hatred, when the opposite was what was intended… I live in hope that one day love will conquer all.” “In hindsight, it was very naive of me to think our motives would not be misunderstood and misrepresented. So much so it started an avalanche of negativity which has made it impossible for us to make the trip regardless of our motives.” Jordan added that “Although I was aware of the concerns with our proposed visit to Israel, I wasn’t quite prepared for the extent of the venom directed at us.”

Ireland Palestine Solidarity Campaign (IPSG) National Coordinator Kevin Squires told the Irish Times that the organization had made the band aware of the cultural boycott and had directed its supporters to target its website, although he denied there was any venom directed towards it.

Raymond Deane, an Irish composer of classical music and a founding member of the IPSC, wrote on the band’s website that it would have “lost all credibility” had it carried out its tour and played in Israel. He praised Dervish’s decision, stating that:

“I salute you for this courageous and morally correct decision. You will now be subject to massive defamation from Zionists and their fellow-travelers – you should see this as proof that you have made the correct decision, because it will reveal to you the viciousness and mendacity of Israel’s apologists.”

Deane denied there was intimidation of the band. He said Mr. Shatter’s views were the “type of psychological projection you always get from Israel’s supporters. Intimidation and bullying is about the only tactics they have because they don’t have truth or justice on their side. They like to pretend they are the victims when they are the victimizers.”

The Israeli embassy has made it clear that there is no cultural boycott in place – rather, the so-called “boycott” that some have called for is instead actually a campaign of “cultural terror.” The reference is to the boycott, divestment and sanctions (BDS) campaign that was launched against Israel in August 2010 and has continued to the present day.

Israeli Ambassador to Ireland Boaz Modai said the campaign against Dervish was a “great pity. It was a “particular shame as culture is supposed to unite people.” “This boycott seeks not only to hurt Israeli artists but also Irish artists, who are being restricted access to a significant cultural market, by being subjected to a vicious campaign of cultural terrorism.

“In spite of this propaganda warfare campaign, we will keep on listening to, engaging with, and loving Irish music and culture.”

There are numerous artists who have chosen to ignore this form of cultural terrorism. Among them was the world-famous Irish dance troupe Riverdance, which performed in the Jewish State in September 2011. Despite requests that Riverdance boycott Israel, the troupe posted this statement on its website: “Riverdance supports the policy of the Irish Government and indeed the policy of every other EU state, that cultural interaction is preferable to isolation.” The troupe appeared in seven performances in Tel Aviv, to a completely packed theater every time.

Minister Alan Shatter is well known for his support for Israel and has spoken out against injustice many times. On June 9th, 2010, Shatter wrote “Demonizing Israel will not end Gaza’s pain or bring about peace.”

…the government should replace soundbyte politics with a substantial constructive international initiative addressing the genuine needs of Palestinians and the legitimate concerns of Israelis. In doing so, it should not fall into the trap of demonizing the Israeli State and validating those intent on undermining its international legitimacy. It should also not unquestioningly support non government organizations who oppose the two state solution advocated by successive Irish Governments and whose agenda coincides with the Hamas Charter to destroy the State of Israel.