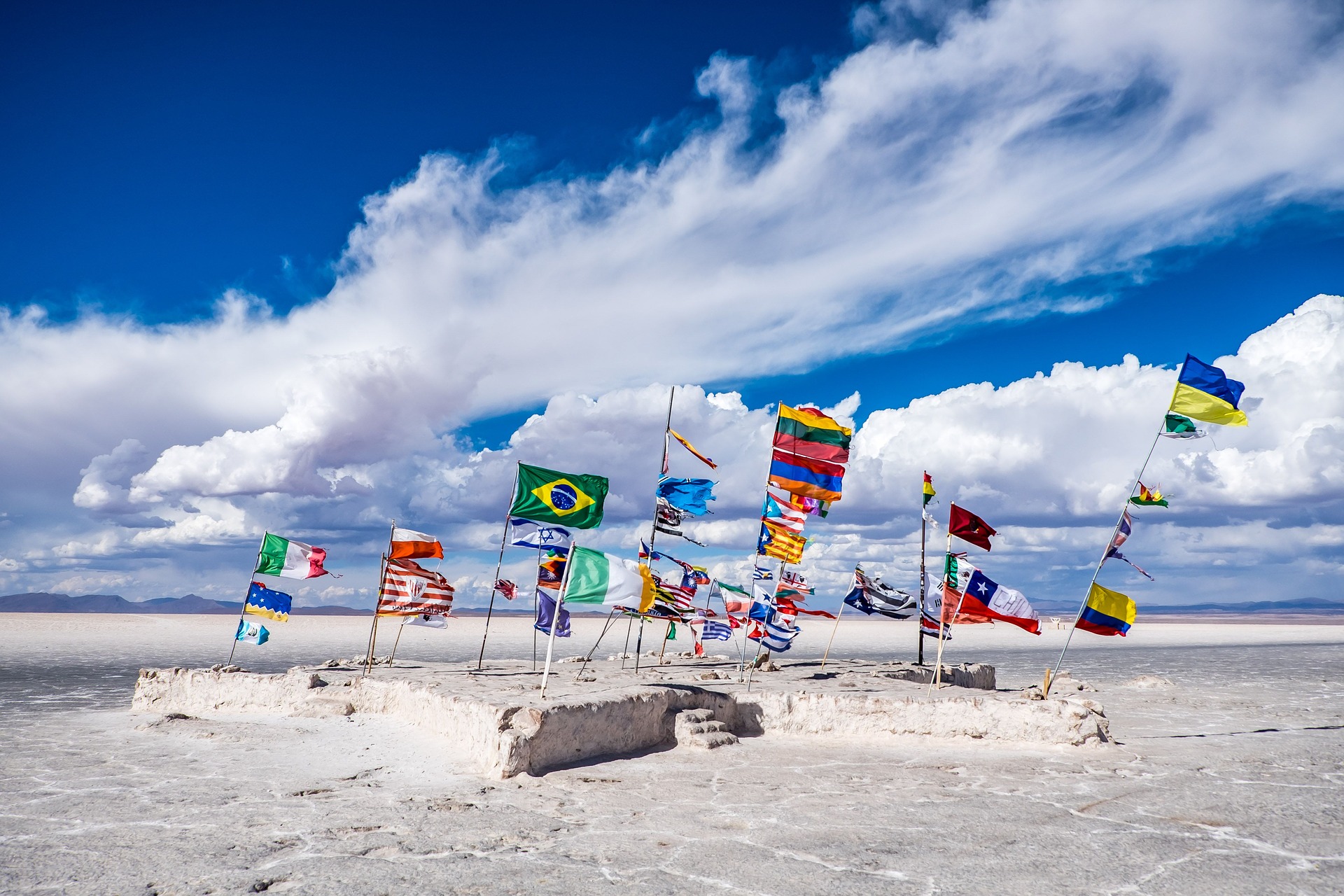 Aside from its aesthetic qualities, some countries place a special meaning behind the colors green, white, and red designed onto their flags. Let’s take a look at some of these countries and see what their flags represent:

–          A disputed state in the South Caucasus, the Flag of the Republic of Abkhazia was created in 1991 and was based on the banner of the medieval Kingdom of Abkhazia. The flag consists of green and white stripes, symbolizing the region’s historical reputation for tolerance of both Muslim and Christian communities. The red canton on the left features a white hand, which symbolizes the state’s welcoming of friends, and shunning of enemies.

–          The flag of Algeria, officially adopted in 1962, consists of two vertical bars of green and white, with a red crescent moon and star in the center, symbolizing Algeria’s dominant religion of Islam.

Based off the Byelorussian USSR flag, the current flag of Belarus shows a red and green flag with an ornamental white-and-red pattern on the left side (the staff end). While there is no official interpretation, current President Alexander Lukashenko explains that the red represents the sacrifice of Belarus’ heroes, while the green symbolizes life.

A tricolor flag consisting of horizontal bars of white, green, and red (respectively, from top to bottom). First adopted in 1879, Bulgaria switched to a flag with the national emblem during the communist era, but shifted back to the original tricolor one in 1991. Tricolor flags usually represent republicanism, liberty, or, in Bulgaria’s case, revolution.

Officially adopted in 1962 after the country’s independence from Belgium, the Burundi flag shows a white saltire that splits the flag into 4 parts, with the upper and lower parts being red in color, while the left and right are green in color. The red represents the suffering the Burundi people underwent for their independence, the green represents hope on the future, while the white symbolizes peace. The three stars in the middle represent both the three main ethnic groups of Burundi (the Hutu, the Twa, and the Tutsi) and as a representation of the country’s motto (Unité, Travail, Progrès).

The current Hungarian flag is a tricolor flag with three horizontal bands of red, white, and green (respectively, from top to bottom). The current flag was the one used in the Hungarian Revolution of 1848, when the Magyars rose up against the Habsburg Dynasty. The colors are explained in the 2012 constitution as such: red for strength (erő), white for fidelity (hűség), and green for hope (remény).

–         Also known as the Three-Colored Flag (or as the پرچم سه رنگ ایران, Parcame se rang Irân), the Iranian flag is a tricolor flag with horizontal bands of green, white, and red (respectively, from top to bottom), with the national emblem of Iran (the word “Allah” in stylized characters) in the middle, and the takbir written in Kufic script in between the bands. Adopted in 1980, it is symbolic of the 1979 Iranian Revolution led by the Grand Ayatollah Khomeini. The colors each have their own meaning: green represents unity, white symbolizes freedom, and red symbolizes martyrdom.

–       Another tricolor flag with three vertical pales of green, white, and red (respectively, left to right). It’s based on the flag of the Cispadane Republic in 1797, and after a few changes, was officially adopted as the flag of Italy in 1946. The colors have two interpretations: the common, secular interpretation values the green as the plains and hills of Italy, the white as the snow-capped Alps, and the red as the blood spilt during the War of Italian Independence and the War of Italian Unification. The other, religious interpretation values green as hope, white as faith, and red as charity.

–          Officially adopted in 1943, the Lebanese flag is composed of two vertical bars at the top and bottom of the flag, with a wide white vertical bar in the middle. A green, Lebanon Cedar is placed at the center of the flag. The cedar itself is a symbol of peace, holiness, and longevity, while the red represents the blood of martyrs who gave their lives to deter invaders. The white, meanwhile, represents snow, which is in itself a symbol of peace and purity.

–          The Malagasy flag, adopted in 1958, is composed of one vertical white bar on the staff side, with 2 vertical bars, red and green, on its right. Red and white were the colors of the Merina Kingdom, the last Malagasy kingdom before the island fell to the French. The Merina Kingdom chose these colors as an homage to their ethnic origins in Southeast Asia, while the Green represents the Hova people, the largest social class in Madagascar, who were instrumental in the independence movement.

Republic of the Maldives

–          The flag of the Republic of the Maldives, adopted in 1965, is comprised of a green field with red borders, and a white crescent moon in the center. The red border represents the Maldives’ heroes and their bravery in defending their nation. Meanwhile, the green represents prosperity and peace, while the crescent moon symbolizes the country’s largest religious group, Islam.

–          Officially adopted in 1968, although the overall design had been in use since 1821, the Mexican flag is a tricolor flag with three vertical bars of green, white, and red (respectively, from left to right). At the center of the flag is the official Mexican coat of arms: an eagle perched on a cactus atop a lake, clutching a serpent with its talons.

–          The Omanis flag consists of a red, vertical bar on its hoist side, and three horizontal bars on the right: white, red, and green (respectively, from top to bottom). At the top left corner is the national emblem of Oman: a dagger crossed by two swords. The national emblem represents the Albusaidi Dynasty, while the other colors have their own meanings: white represents Oman’s imam, while the green represents the Jabal al-Akdar, or the Green Mountains. The red is a common motif in the Gulf States.

–          The Tajik flag, adopted in 1992 as a replacement of the Tajik Soviet Socialist Republic flag, is aesthetically close to the Iranian flag (largely because most of the people in Tajikistan are ethnically and linguistically Iranian). The Tajik flag consists of three vertical bars: red, white, and green (respectively, from top to botoom), with a crown at the center of the flag. Atop the crown are seven stars. The colors represent various concepts: red symbolizes sunrise, but also unity and victory, as well as its Soviet past and the bravery of heroes. White represents the ice and snow of the Tajik mountains, but also purity and innocence. Green represents the fertile valleys of Tajikistan and the generosity of nature. The crown represents the Tajik people (because the name Tajik is derived from the Persian tâj, which means crown), while the seven stars represent happiness and perfection.

–          The Welsh flag, or the Y Ddraig Goch, consists of 2 vertical bars, white on top and green at the bottom, with the red dragon of Cadwaladr in the middle. It was officially adopted by the Welsh in 1959, although the design of the dragon has been around since time immemorial. The white and green stripes come from the House of Tudor, the Welsh dynasty that held the English throne from 1485 to 1603. The red dragon, on the other hand, has been around since at least the Roman occupation of Britain, when Roman cavalry troops bore Draco standards.